Use popular, well-supported technologies like .NET, C#, ASP.NET MVC, and SQL without paying vendors a dime. If it doesn’t work out you can easily switch to paid platforms and tools. See an example of this stack out on botswarm.io

Why would I want to do this? Using this stack and tool suite gives you the support and benefits of C# and .NET without the vendor-lock and many licensing fees for tools, operating systems, and servers. The best part is, you can seamlessly switch over to Windows development and hosting if you end up finding something you don’t like.

Why not use .NET Core and VS Code? Both are great respective frameworks and IDEs, but .NET Core lacks much of the functionality of full .NET. For example, the other day I was trying to write a simple IOC container for .NET Core and wanted to invoke GetExecutingAssembly. No dice – that handy function doesn’t exist in .NET Core, along with many others. Additionally, VS Code is a very cool IDE, but it’s not there yet from an enterprise perspective, and maybe never will be since that’s probably not its purpose. One stark example is the debugging features and experience between VS Code and a full IDE like Visual Studio Community or MonoDevelop.

What exactly is new here? Nothing! I’m not inventing anything, rather showing you a great technology stack and tool suite that can be used reliably from development, to deployment, to hosting for projects of any size, importance, or complexity. This is all based on my own trial and error over the course of several years.

This writeup assumes that you’re a whiz .NET developer and general tech guru. Some things I’ll go through quickly, as they are intuitive to set up or there is already a lot of support available on the Internet. With any setup like this you’ll inevitably run into snags. Just post below and I can help you out. I’ll be sure to update this as people point out things that need to be clarified or fixed. One more thing – we’ll be building and hosting a web app below, but this stack can also be used to host .NET services and processes, and other APIs.

Let’s start with what a development machine looks like:

Hardware: The best and fastest you can afford 🙂

There is a lot of support for installing and configuring the above operating system and tools, so I don’t need to go into too much detail here. This is what my dev machine looks like: 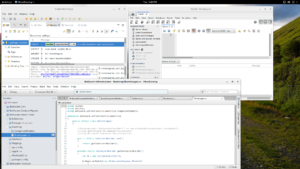 Ok, so your dev machine is all set up. Let’s write, well create, some code! Open up MonoDevelop and got to File – New – Solution, and pick an ASP.NET MVC Razor Project with Unit Tests. MonoDevelop will scaffold out a nice solution for you. Now, if you’re missing the option for that project, you may need to install some additional packages. Ample help is available online, and you can also post below for help. 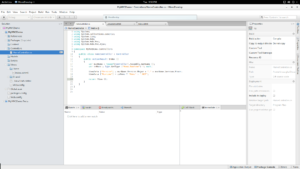 You should now be able to hit “play” and start up the app. I modified mine a bit… 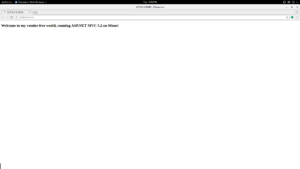 Keep in mind, this is a full featured IDE and .NET framework (mostly). You can install nuGet packages, Entity Framework, anything. I’m running some extremely complex apps on this stack. And the best part is, you can immediately pop over to Windows and open your app in Visual Studio if you decide this isn’t for you.

Alright, that was fun and hopefully not too difficult. Now we need to commit our code somewhere, and we need to host our cool app, and our app will probably need a database as we build it out. So let’s set up some servers.

Host machine hardware: You probably want at least an I5 with 8GB RAM and 500 GB or storage

I’m assuming you have some kind of host machine available, so grab that and install an instance of desktop Ubuntu on it, then download VirtualBox and we’ll build out 3 machines. You’ll want to bridge the 3 VMs in VirtualBox so they can see your network, and you probably want to set your DHCP to assign static IPs to their virtual hardware addresses.

Let’s start by building the git server so we can commit the code we just wrote:

Download an mount the Ubuntu Server image, and install it on this VM with the default options. Check option to install SSH Server. Once the server is set up, terminal into it using Putty or other SSH client:

You should now be able to commit your code, and you’re good to go on the development side. You can spin up more dev stations and add resources to your Git instance, and be a 500 developer team in no time. Lets move on to hosting!

Same thing as earlier – set up Ubuntu server, this time you’ll want to opt for Apache and SSH Server. Once set up, terminal into the server. We have a little work to do this time!

– Create a directory for your app, and set it’s permissions:

– Create a server config file for the app – save it in etc/apache2/sites-available:

A few more things – You’ll want to add necessary ports to ports.conf, depending on the port you want to use to host the app

You can test your Apache instance by navigating to the IP address of the server in a browser. Now you’re ready to deploy – for now we can simply copy the files from your project folder in MonoDevelop to your Apache web folder. You’ll probably want to set up samba so you can easily deploy to your app folder over the network. In the future you could can set up a CI and deployment framework that we either write ourselves, or use one of the many existing open source ones.

This is getting crazy, but it’s also really cool. Let’s spin up a MySQL instance that our app can use:

– Allow access from all machines (or a set) — Open MySql shell:

mysql -u root -p
GRANT ALL PRIVILEGES ON *.* TO 'USERNAME'@'%' IDENTIFIED BY 'PASSWORD' WITH GRANT OPTION;
flush privileges;

You can now fire up MySQL Workbench and connect to and easily work with your DB. It’s one of the best DB management suites around, and it’s free! Connecting your ASP.NET app to the DB is pretty straightforward – you’ll need to reference in the MySqlConnector library, and you can then use ADO.NET or your favorite ORM like EF, Dapper, or nHibernate to interact with MySQL.

So there you have it, a full enterprise stack using well-known technologies like .NET, C#, and SQL, and it won’t cost you a penny. And if you do want to start giving people your money it’s easy to make the switch. You can check out one of my sites hosted on this stack here. It’s an older site using ASP.NET WebForms and VB.NET, and I actually moved it over to Apache and MySQL from IIS and SQL Server.  In the near future I have a couple large MVC and MVVM apps I will be deploying to prod, using the stack and tooling described in this post.